Another grandson recovers his identity and his life story

We Found the Son of Rosario del Carmen Ramos, Our Grandson 128. 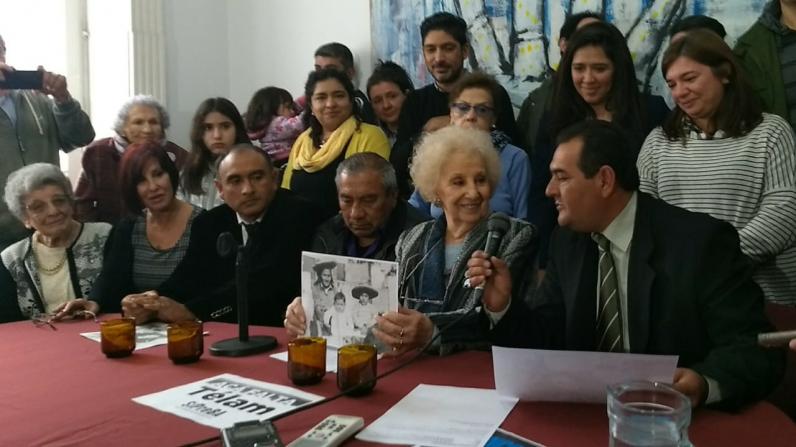 Press conference on August 3rd, 2018 at the offices of Grandmothers of May Square where it was announced restitution of the Grandson N° 128, Marcos Eduardo Ramos, son of Rosario del Carmen Ramos. Joining the Grandmothers and Grandchildren, there were also present Marcos' brothers, Camilo and Ismael.
Author: Gaspar Galazzi Source: Abuelas Data: 05.12.2017

Grandmothers of May Square celebrates that another grandson has been found who lived 42 years with his identity changed. The son of Rosario del Carmen Ramos, Marcos was born in San Miguel de Tucumán where both were kidnapped, he with almost five months of life. Yesterday, the new grandson learnt of the news, met with his family and, with the help of the Grandmothers of May Square, will start to rebuild his life history and identity.

Rosario was born the 6th of October of 1948 in El Diamante, Santiago del Estero province. She had eight brothers and a sister, her family called her "Charo". After moving to Tucumán province, she married Ismael Amado Suleiman, with whom she had her first two children: Ismael and Camilo. Rosario was an active militant of the PRT [Workers' Revolutionary Party]. After separating from her husband, she was kidnapped at the beginning of 1976, being pregnant, during a covert operation by security forces in the vicinity of the old sugar cane landing in San Jose city. The kept captive several weeks until she was released. Her third son, Marcos Eduardo Ramos, was born the 9th of June of 1976.

In November of 1976, during an illegal covert operation in the city of Tucuman, Rosario was kidnapped one more time in white Ford Falcon with unknown destination. Camilo at the time was under the care of his father, but Ismael and Marcos, who lived with their mother, were taken to a house located in Tafi Viejo. That was the last time that Ismael saw his younger brother. After staying for a week in that house, Ismael was moved to another house in Tucumán city, from which he escaped many times, until in one occasion, he managed locate a paternal uncle, who gave informed of his whereabouts to the father of the child. In this way, Ismael was able to be rescued. From that moment he became aware that his younger brother had been kidnapped. Rosario continues missing.

Ismael went to the National Commission for the Right to Identity (or CONADI for its Spanish acronym) in 1999 and told the Commission that, in 1976, he had been kidnapped along with his brother and his mother and that he had never seen them again. In a separate incident, in 2013, information was received at the Permanent Reward Fund in the National Ministry for Justice and Human Rights about a young man, son of disappeared ones, appropriated by a person imputed of crimes against humanity in the province of Tucumán.

This new information was delivered to the Specialized Unit for Cases of Appropriation of Children During the State Terrorism, in the Ministry of the Public Prosecutor, who started an investigation into the veracity of the complaint. After confirming that it was likely that the young could be the son of disappeared one, referred the case to the Federal Prosecution Number 1 and the regional Office of the Attorney for Crimes Against Humanity of Tucumán, who brought the case to the Federal Court number. 1. This is the way by which Marcos was found and who voluntarily agreed to be DNA tested at the National Genetic Data Bank, at the requested of the judge

Marcos is the second grandson restored in Tucuman province. This bring back the horrific evidence of the mass graves discovered and investigated there; the identification of more than a hundred of disappeared women and men; thus, proving the existence of a local chapter of the national systematic plan for the appropriation of boys and girls. The case of Marcos should contribute to put an end to the denial, the justification and the neglect that remains in part of the [Argentinean] society and, in the province of Tucumán. Also, it highlights the importance of strengthen the organisms which from the government are involved in the elucidation of these crimes of against humanity.

However, in addition, it is essential the help coming from the society at large: only with this help, we will be able to know where our grandsons and granddaughters are and what happened with our sons and daughters. The restitution of Marcos is the result of new data which we could not have had access otherwise. Our grandsons and granddaughters can be around any corner. Any information no matter how insignificant may seem, maybe the missing piece needed to reach out to one of them. Far from causing any harm or minding into someone else's business, you will be part of the healing process in the history of our country which still hurts. The grandsons and granddaughters will thank you. Lastly, although many Grandmothers are not already with their families, energized by their fight, we can achieve that postponed embrace.