We found a new granddaughter 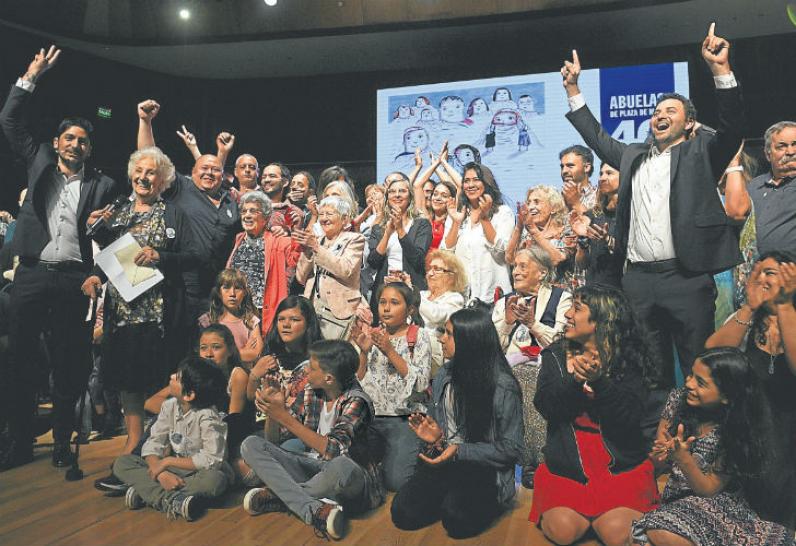 Announcement during the 40th anniversary of The Abuelas, of the restitution of the Granddaughter #125
Author: CEDOC Source: BUENOS AIRES TIMES Data: 26.10.2017

Lucía was born on June 6, 1953 in the city of Santa Rosa, Province of La Pampa. Her family called her "La Flaca" ("the Slim"). Lucia moved to the city of La Plata, where she studied law and was an active member of the University Peronist Youth. She was kidnapped on November 27, 1977 in that city, at age 24.

For a year Lucia's family looked in vain for her; unable to uncover any news of her until in November 1978, a year after her disappearance, her brother, Aldo Tartaglia received a first letter from Lucia where she recounted that she was detained. Lucia then wrote another letter telling that she was pregnant and expected to give birth early in the year 1979.

With the return of democracy to Argentina, her family could learn that Lucia had been kidnapped in the clandestine detention centre known as "Athletic-Bank-Olympus", thanks to testimony from survivors who had seen her there. She was known with the nickname of "Anteojito"(" Petite Glasses"). The survivors also reported that Lucia was pregnant and had been taken to give birth while still in captivity.

The case for the disappearance of Lucia was heard at the Federal Criminal Court No. 2 in relation to the crimes of the repressive circuit ABO, for which fourteen repressors were sentenced on March 22, 2011. Samuel Miara was among them

Thanks to the perseverance of our search and of all the Human Rights movement, today the granddaughter #125 knows the truth about her origin.

Since Lucía's family learned of her pregnancy, they undertook the search for the boy or girl born during her captivity, they provided the family's genetic samples to the National Bank of Genetic Data (BNDG) allowing today to know her true identity.

The young woman was summoned as part of a judicial inquiry where there were doubts about her identity and was informed about the possibility of being the daughter of a desaparecida (disappeared one). After a reasonable time, she agreed to voluntarily give a biological sample to compare her DNA to the samples stored at National Bank of Genetic Data. On October 25, 2017, the results of the analysis were reported to the Court, which in turn reported it to her personally on October 26 in the morning.

The court case currently transacts in the Federal Criminal Court #1 at the city of Buenos Aires, presided by Dr. María Romilda Servini de Cubria. It also involved the Attorney Federal Office #5, of which Dr. Franco Picardi is in charge.

Once again, we celebrate the newly gained freedom of a new granddaughter who dares to know her truth and we encourage all those who can provide information about possible men and women who are in the same situation to do so.

News like this one brings comfort to the soul. It also gives us strength to continue in our search which began 40 years ago and seek to make a reality the embrace of someone with her/his loved ones, for hundreds of families who still wait and desire it. Welcome to the Truth, granddaughter 125!