Human rights organizations here present would like to state our most energetic rejection to the decision taken by the Supreme Court of Justice which leaves the door open for repressors convicted for crimes against humanity to be freed by applying "2 for 1", a law enforced only between 1994 and 2001 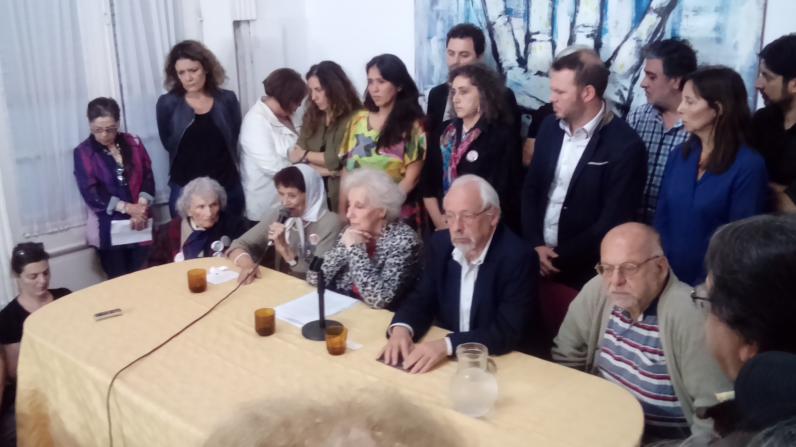 As publicly known, the Court's decision with most of the judges in favour: Elena Highton de Nolasco, Carlos Rosenkrantz and Horacio Rosatti declared applicable Law 24.390, waivered in 2001, most commonly known as 2 for 1, in Luis Muiña's case.

Until today, it remained unquestionable that this law did not apply to dictatorship crimes, since it was not in force during their commission or during the judgment of these crimes.

Today's judgment leaves the door open for these murderers' full impunity. As judges Lorenzetti and Maqueda argued by casting their votes in dissidence, reduction of sentence is not applicable to crimes committed during dictatorship. These crimes do not conclude until the destination of disappeared people and appropriated grandchildren is known, therefore previous and non standing legislation cannot be applied. Such criteria is also claimed by the Inter-American Court of Human Rights, to whom the Supreme Court is turning a deaf ear once more.

It becomes imperative to remember that these murderers were judged belatedly due to impunity laws in force and that in most cases sentences are not yet final due to the legal system's own delays. This judgment could benefit hundreds of repressors imprisoned in custody, obtaining drastic reductions on their sentences thereof and even requesting to be freed for having served two thirds of their conviction.

This decision opens up as well an uncertain situation for those judgments on children appropriators because it changes the criteria regarding applicable case law until our days, even endorsed by the Supreme Court itself.

Therefore, appropriators could face three years in prison, parole and thus a crime which has been taking place for 40 years would not receive a condemnation according to its gravity.

What drew special attention was that judge Highton de Nolasco, who in other opportunities delivered justice in favour of the truth, is today voting in the opposite direction and in tune to the winds of impunity. For example, in 2009's Magnacco sentence, which was strangely omitted by most of the Tribunal, she reached a completely opposite decision to the one she reached today, by considering the application of law 24.410 (more severe punishment to appropriation crimes).

We will not give up the fight for Justice and we issue the following warning: we will exhaust all national and international legal options until we achieve the abandonment of this criteria which enables impunity. At the same time, we call to all the people to defend our conquered rights, the key to safeguard the so-called phrase "Never Again" in our society.