Press release about the restitution of grandson #121 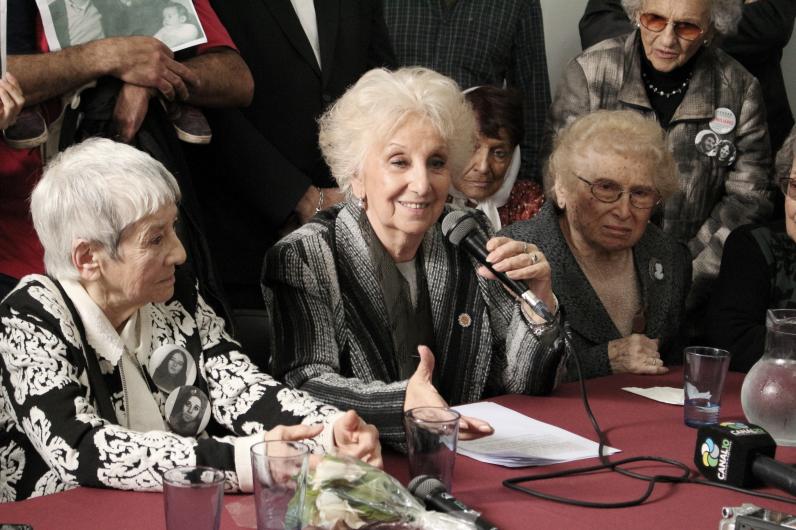 Abuelas de Plaza de Mayo are immensely happy to announce that we have found the grandson #121, son of Ana María Lanzillotto and Domingo "El Gringo" Menna, both used to belong to the workers Revolutionary Party (PRT) and the Revolutionary People's Army (ERP). This is also the nephew of Alba Lanzillotto, member for more than 25 years of Abuelas de Plaza de Mayo and the only aunt who was a member of the Board of Directors. The grandson #121 will also meet a brother and a big family dedicated to political, trade, social, cultural and religious activism and who also looked for him tirelessly until found.

When Alba was 19 years old, her sisters, María Cristina and Ana Maria, were born, known to everyone as "las mellis" (the "twinies"). Born on April 22, 1947 in La Rioja. They graduated in 1964 to become teachers, always together, and traveled to study to Tucuman: Ani, law school, and Tina, legal clerk. There, they got in contact with the PRT and began their activism. The two became emotionally involved with colleagues from their militant group: Tina with Carlos "cacho" Santillán, from Santiago del Estero province, with whom she had two children, Maria and Jorge; and Ani with Domingo Menna, Italian, born the 1° of March of 1947, later immigrating to Tres Arroyos city in Buenos Aires province.

The Gringo began his militancy in Cordoba city, where traveled to study medicine and participated of transcendental events for the revolutionary militancy such as the Cordobazo and the breakout from Rawson prison. Ani and el Gringo got married and had two sons, Ramiro Nicolás and another baby that passed away.

On July 19th, 1976, Ani and el Gringo were kidnapped together with Mario Roberto Santucho, its companion Liliana Delfino and others militant of the PRT, in a military operation, portrayed in the media at the time as "a success in the fight against the subversive judeomarxista terrrorists" that had allowed "annihilate the leaders of this revolutionary organization". Ani was eight months pregnant, and by testimonies of survivors, it was discovered that she and el Gringo were detained at Campo de Mayo. The young woman was also seen in the clandestine detention center known as "Puente 12" (Bridge 12).

In November of that year, Tina and Cacho had also been kidnapped in Pergamino. Ramiro was rescued by the Lanzillotto family and raised by a sister of Alba in Carmen de Patagones. Maria and Jorge could also be recovered and grew along with his paternal grandparents in La Banda, Santiago del Estero. The son of Ana Maria and Domingo, must have been born in captivity in September 1976, nothing was known about him until last Monday.

The first complain registered in Abuelas for the son of Ani and El Gringo was made by Irma Ferrara of Menna, exiled in Mexico, in 1982. Irma reported that her daughter had been kidnapped "pregnant of 8 months and in perfect state of health". With these data Abuelas entered the case to the list of sought grandsons and granddaughters. Later, the sister of Ani, Alba Lanzzillotto, would push forward the search. Alba had been arrested the day of the coup, of March 24, 1976, and had to become an expatriate. She returned to the country in 1984 and returned to teaching in La Rioja, then requested her transfer to Buenos Aires where she worked at the School Board. While there, she began a routine of, after work, she would pass by Abuelas de Plaza de Mayo. Growing inside her was the determination to seek Ani's son/daughter.

Since 2004, Abuelas has been investigating leads about who we now know to be the nephew of Alba. The research team had gathered sufficient documentation as to approach the man and to raise the possibility that he was the son of a disappeared one. At the same time, the National Commission for the Right to Identity (CONADI) was conducting an investigation in collaboration with the federal court number 3 of La Plata city - within the framework of a cause where grandmothers is a plaintiff against Doctor Juana Franicevich, who had already signed the birth certificates of two previous recuperated grandchildren. To verify that the two agencies were investigating the same case, by mutual agreement, it was decided to CONADI to contact the potential grandson.

Finally, in June he was called by the team at the CONADI and he agreed to be voluntarily tested at the National Bank of Genetic Data (BNDG). On Monday, the Bank told Executive Director of CONADI, Claudia Carlotto, that man is the son of Domingo Menna and Ana María Lanzillotto. She contacted the new grandchild and informed him about his true identity.

The disappearance of Ana Maria and Domingo "el Gringo" Menna was judged in 2013 in one of the sections of the trials for crimes against humanity committed in the clandestine detention center which operated in Campo de Mayo. On the other hand, there is a pending trial in the TOF No. 3 of the city of Buenos Aires for the appropriation of their son, where military doctor Raúl Eugenio Martín will be on trial in addition to Santiago Omar Riveros and Reynaldo Benito Bignone (both already been found guilty many times in other similar crimes).

Despite what is still missing, of the elapsed time, today is a day where there is more justice in Argentina. The son of Ana María Lanzillotto and Domingo Menna knows the truth about his origin and soon he will be able to embrace his brother, uncles, cousins and nephews who looked him for 40 years.