During the press conference, Abuelas urged the Santa Fe province justice system to restore him of his true identity. 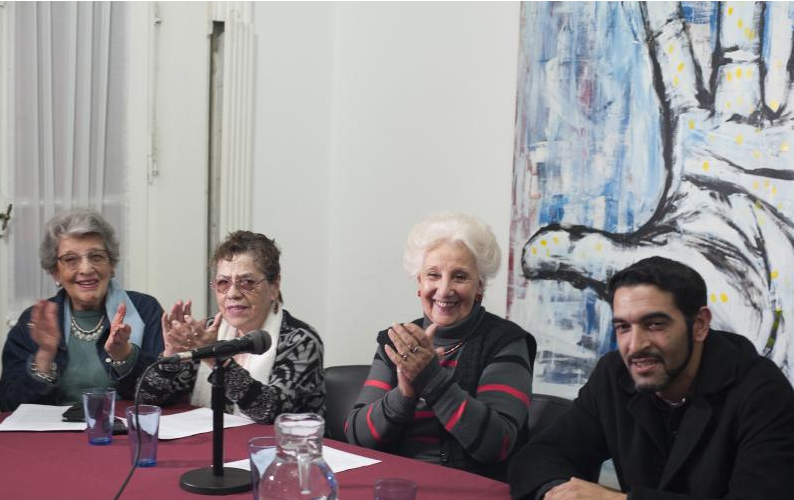 Abuelas de Plaza de Mayo introduces José Luis Maulín Pratto as a new case of restitution of identity, stolen during the period of State terrorism, and demands the Federal Justice of Santa Fe to return his true parentage identity, undoubtedly resolved in 2009. Since then, Jose Luis has tried by several means to recover his true surname. In October 1976, in Reconquista, province of Santa Fe, a gang composed of police officers, members of the III Air Brigade of Reconquista and other military personnel carried out a raid at the home of a young couple. By brute force, destroying everything, they kidnapped Rubén Maulín, a worker and political activist of the PRT [Revolutionary People's Party], witnessed by his two young children and his wife Luisa Pratto, pregnant for four months. During the same operation they took Rubén's mother, Ana Elena Schoesting and other family members. Luisa was alone with her two children and her pregnancy. Weeks later, her younger sister, Griselda, arrived from Buenos Aires to help her, but she was also kidnapped.

The oppressors focused their anger on to Luisa who was tortured at her home, in front of her children, as well as raped repeatedly. When she was about to give birth to a local private hospital, on March 26, 1977, Luisa was registered with the name of the appropriator - Cecilia Góngora of Segretin-, evidencing the premeditation of the crime about to be committed by planting proof, at the same time, of the surname that her son would take. The baby was; then, given to a married couple, Jose Angel Segretin and Cecilia Góngora, linked by family ties to the Air Force, and renamed José Luis. His appropriators registered him in the Civil Register with a forged birth certificate, signed by Dr. Elsa Nasatsky de Martino.

By then, Rubén remained detained but; now, as a political prisoner. These were years of great pain for Luisa. After childbirth, and for a long time, she was continuously visited by the same police gang that had kidnapped her husband and brothers, and subjected to torture and sexual abuse. José Luis's grandmother, Ana Elena, took care of the children and accompanied Luisa on her claim for her husband and another kidnapped son. When Rubén Maulín regained his freedom, in 1982, the parents went to demand Justice for the child restitution but did not get a satisfactory response and were told that nothing could be done.

For a long time, Ruben and Luisa were unaware of their son's whereabouts, however, at the end of the ' 80s, a neighbor of the couple brought them information about the place where their son was living. It was thus that they made another claim for him; however, the lack of documentation and the threats by the appropriators prevented them from getting their son back. In the early ' 90s, Gisela, José Luis' older sister, heard at her school of a child with the surname Segretin and attempted to talk to him, but the meeting did not prosper as Cecilia Góngora threatened Gisela in an effort to hamper the search.

Jose Luis, by then, already knew that he was not the son of the woman who had raised him, but stories about his origins would vary depending on the circumstances and convenience of the appropriators. From an early age, he had doubts about his identity, not only because of the physical differences, but also he had an older sister, also adopted. At first, he was told that it was the result of an extramarital affair of Segretin, but; then, other versions were given; however, always with inconsistencies.

In 2008, Luisa and her sister Griselda made another attempt before the courts, telling again what they had experienced during the period of State terrorism. After years of impunity, it was the first time that the Santa Fe justice system agreed to investigate their case. This time, it was already two years that many victims of State terrorism in the region had begun to testify in the "Air Base cause". Luisa gave an interview on one of the city's radio and her story became known to Jose Luis, who felt motivated to find out about his identity.

In January 2009, José Luis took courage and called Luisa to tell her that, according to the descriptions that she had made on the radio interview, he could be her child. They met for the first time in February, and in April, he initiated the legal claim for his identity. Quickly José Luis, Rubén Maulín and Luisa Pratto traveled to Buenos Aires and conducted the study at the National Genetic Data Bank to confirm their link: he was the son who, for 32 years, they had been looking for.

Jose Luis says that he regained his family and his family regained him. Since 2009, he maintains a close relationship with them and their bond is strengthened day after day.

The trial for his identity

Last week in Santa Fe, the trial began for the appropriation of José Luis, in which the Cecilia Góngora is implicated and charged as well as the doctor who attended the birth and signed the birth certificate, Elsa Nasatsky de Martino. Also charged was the head of the III Brigade Air Base of Reconquista, Danilo Sambuelli, however, he died in December 2014.

In 2013, Sambuelli had already been sentenced to 21 years in prison for the kidnappings and torture of 39 militants, among them Rubén Maulín - José Luis' father - and by the repeated "aggravated violations" of Griselda Pratto - his aunt- in a landmark judgment because this was the first time in the province where sexual violence in clandestine centers was trialed within the context of crimes against humanity.

José Luis, on his own, approached the Oral Court of Santa Fe last month and left a letter requesting the trial to happen as soon as possible. "I'm José Luis Maulín, but I am still under the legal constrain to use the name José Luis Segretín," he wrote in the first line. And, in a paragraph, he told the judges of "the distress and misery of carrying an identity that is not his own", and be the victim of "a crime that was committed 38 years ago, but which is repeated every day", to him and his sons who are currently 12 and 16 years.

The case of José Luis was not among the reports of disappeared children in Abuelas de Plaza de Mayo, nor in the new cases which, thanks to the investigations of the National Commission for the Right to Identity [CONADI for its Spanish acronym], are being incorporated to the Data Bank. However, it's another case of child abduction, concealment and falsification of identity of a baby in the framework of State terrorism, as are the appropriation of our grandsons and granddaughters. Thanks to his courage and of his family, they managed to reconstruct the facts that the genocidal conspirators tried to delete and misrepresent. After learning in-depth his story and the suffering of his parents to recuperating him, Abuelas has decided to add his case to list of returned grandchildren, as an act of reparation and historical truth.