The daughter of Gladys Castro and Walter Dominguez recovered her identity

Abuelas de Plaza de Mayo joyfully informs that has found the daughter of Walter Hernán Domínguez and Gladys Cristina Castro, who was born during her mother's captivity in March 1978 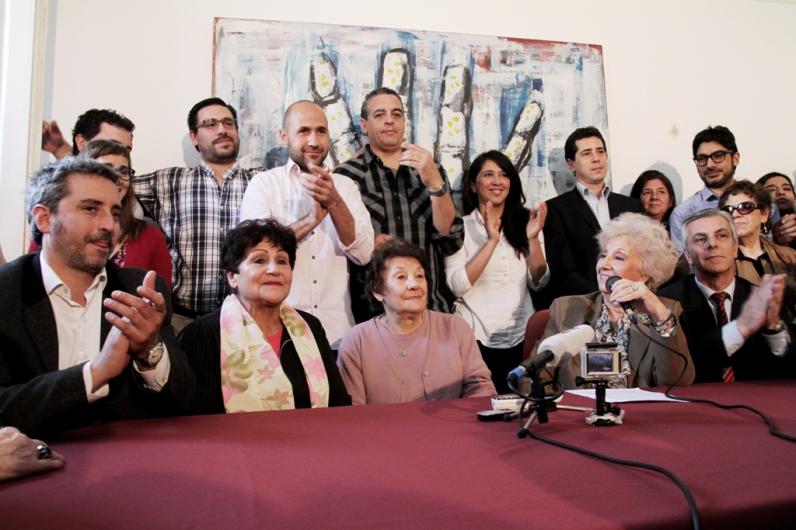 During this press conference, the restitution of Granddaughter 117 was informed, she was the daughter of Walter Hernán Dominguez and Gladys Cristina Castro, she was born during her mother's captivity in March 1978.
Author: Gaspar Galizzi Source: Abuelas Data: 31.08.2015

Walter and Gladys were abducted on December 9, 1977, in Godoy Cruz, Mendoza. At that time, the young woman was six-months pregnant and from then on there were no news about them.

Today, the two grandmothers, María Assof Domínguez and Angelina Catterino, as well as the paternal uncle, Osiris Rodolfo Domínguez joins us. They have travelled from Guaymallén, Mendoza in order to share this happy moment.

Gladys was born on November 23, 1953, in Guaymallén, Mendoza, whereas, Walter was born on March 30, 1955. The young woman studied Design while Walter had studied Architecture; both of them were members of the Marxist-Leninist Communist Party (PCML).

On November, 1976, once Walter had finished military service, they got married. Gladys used to work at a bakery while the young man was a bus driver. On December 9, 1977 during a police raid (conducted by military forces), the couple was abducted from their house in Godoy Cruz, from then on there were no news about them nor about the baby.

Domínguez and Castro families begun the search from the moment the couple disappeared. They went to the Archbishopric, to the Air Force Squad number IV, to the SIDE (State Intelligence Department), they filed habeas corpus however they received no answers.

When María Assof grandmother heard about other cases like hers, she decided to travel for the first time in her life to Buenos Aires, there she contacted Abuelas de Plaza de Mayo where she filed a complaint as regards the disappearance of the couple, and started to look for the baby boy or girl. From then on, both families regularly travelled to Buenos Aires in order to provide information or to ask for information about the searches; consequently, every time we travel to Mendoza we are welcome with arms wide open.

In 1994, the Ecumenical Movement for Human Rights (MEDH) send to Abuelas an anonymous complaint about a young woman born in March 1978 who had mysteriously appeared at the home of an elderly couple. The young woman was registered as their daughter, however, she knew that they weren't her biological parents but she never thought about contacting Abuelas. The discovery of the daughter of Gladys and Walter was delayed for 21 years because of state terrorism.

During 2009, the complaint- together with the information shared between Abuelas and the Sate aimed to search for our appropriated grandchildren- was sent to the CONADI to conduct an investigation to solve the crimes committed by the state terrorism.

In this sense, in April 2004, the Human Rights Department decided to create, within the Conadi, a team to approach people who could be the descendant of disappeared parents. Such a team was already functioning from 2006 within Abuelas.

This team of work, immediately started to investigate the cases of young men and women reported as possible descendants of disappeared parents, who have not yet decided to voluntarily approach Abuelas or Conadi.

In February of this year, the granddaughter received a call telling her that the Conadi had information that suggested that she could be the daughter of disappeared parents, and they invited her to take a DNA test. The daughter of María Assof Dominguez and Angelina Catterino accepted immediately, she took the test on July 16.

The right to identity is recovered once again in this country, thanks to the efforts of a State and a society that does not want to ever live state terrorism again. The only pending issue is a special embrace that both Domínguez and Castro families have been waiting for about 37 years. Welcome to the truth, granddaughter 117.