Abuelas de Plaza de Mayo informs with great joy the restitution of the identity of Guido Montoya Carlotto, son of Laura Carlotto and Walmir Oscar Montoya, he is also the grandson of the president of our Association: Estela de Carlotto. 'I want to thank everybody, thank God, and thank life. Because I did not want to die without hugging him and it will happen soon', said Estela at a press conference. 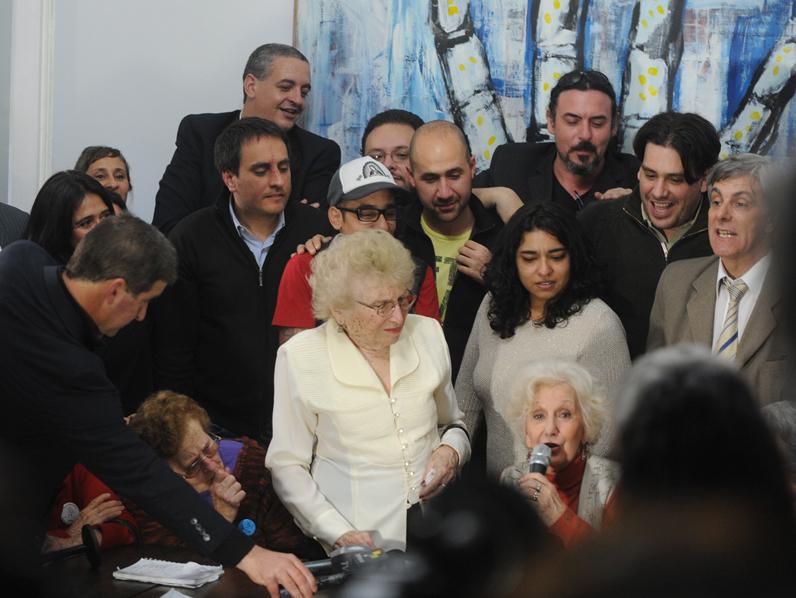 Estela de Carlotto starts the press conference to inform, not only as the president of the institution but as a grandmother, the encounter with her grandson Guido.
Photograph: Rolando Andrade Source: Abuelas Data: 08.05.2014

In June of the current year, a young man who had doubts about his identity sent an email to Abuelas in order to find information about his origins. After sending several emails, he formally presented himself by post mail because he lives in another city. Afterwards, he approached to the office of Abuelas located at Virrey Ceballos in order to attend an interview with the members of the Commission of voluntary presentation of Abuela's organization. Since there was evidence that he might be the son of forcibly disappeared parents, the National Commission for the right of Identity (CONADI) intervened to fix the date to take a DNA test at the National DNA Data Bank (BNDG).

Guido has begun to doubt about his origins a long time ago, he even formed part of activities related to 'Musicians for Identity' [Músicos por la identidad]. However, he knew that he was not the son of those who raised him thanks to the confession of someone close to that family.

Today, the BNDG informed both CONADI and Justice that such young man who had doubts about his identity is the son of Laura and Walmir Oscar, he is Estela's grandson.

Laura was born on February 21, 1955, at La Plata. She was an active member of Montoneros; her mates called her 'Rita'. She was kidnapped on September 26, 1977 while she was at her home in the City of Buenos Aires, by then she was two and a half months pregnant. On the other hand, Walmir Oscar Montoya was born on February 14, 1952 in Comodoro Rivadavia, Chubut. His family and friends used to call him 'Puño' or 'Puñalito'. He formed part of Montoneros and his mates called him 'Petiso', 'Chiquito' or 'Capitan Jorge'. Walmir Oscar was kidnapped in late November 1977, and it is possible that he had remained kidnapped at 'La Cacha', a clandestine detention center. In May 2009, in the framework of the Latin American Initiative for the Identification of the Disappeared (LIID) carried out by the Argentine Forensic Anthropology Team (EAAF), his remains were identified. The young man was buried as NN (no name) in the cemetery of Berazategui on December 27, 1977.

According to testimonies, it was known that Laura remained kidnapped in 'La Cacha' clandestine detention center. In June 26, 1978, she gave birth to a baby boy whom she called Guido, at the Military Hospital. After giving birth to the boy, she was returned to 'La Cacha' without his baby. The young woman was murdered in August 25, 1978, and in 1985 her remains were exhumed at La Plata cemetery and identified by the EAAF.

Today, Estela de Carlotto, together with her family, Abuelas, grandchildren, team members, human rights bodies and friends, stated: 'I want to share with you this great joy that life gives to me that is, finding the ones that I looked for, together with my family, my 13 grandchildren, my 2 dear grandchildren, my 3 children. The anniversary of Laura's murder is coming soon, I want her to smile from heaven, I want her to say what she already knew about me, even before I did, because I was not a woman who fought, at least not a fight like this one: 'My mother won't forget what you are doing to me, she will go after you'. I only look for justice; I look for the truth and this type of encounters with our grandchildren, now with my grandson. I think Laura is saying: 'Mom, you have won a long battle.'

This is a reward for all of us. First, now I have all 14 of my grandchildren with me - he will sit in the empty chair; his image will fill the empty photo frames.

I've seen him, he is beautiful, an artist, he is a good kid. And he looked for us. What Abuelas always say became true: 'they will look for us, as well as we are still looking for them'.

He came to Abuelas, he was received. He went to CONADI; they received and listened to him. Today, they are telling me he is my grandson with a 99,999% of accuracy.

That is why I want to share my joy. We can not share much information, as a matter of respect. You know that, on the one hand, I am Estela de Carlotto, and on the other hand, I am the head of this institution, just another grandmother. We have codes; he must not be bothered, he already knows, what is more, some people told him that he looked like the Carlottos that he looked like me. So he probably won't be surprised by the news. He has just sent a message saying that he is very shocked. He has sent a message to Claudia, the person in charge of telling him: 'You are Guido, you are a Carlotto, you are Estela's grandson, and you are my nephew.' She wanted to tell him everything, but it wasn't right. We don't know the whole story yet, however we are going to put the pieces together. We have plenty of information; still, we are going to be prudent because this is a lot for a person to take, even if he expected it."

I haven't heard his voice yet, he has just sent a message to my daughter Claudia, telling her that he was very happy. There is nothing better than hearing that.

I cannot forget that I am a part of this institution, of this family. This is for those who say stop it, for those who doubt about our mission, and for those who want us to forget, to turn the page. On the other hand, for good Argentineans, it means reparation, reparation for him, for our family and for the society as a whole. However, there is a long way to go, we must keep looking for the missing ones because other grandmothers must feel what I am feeling today.

I want to say thank you to everybody, to God, to life. Because, I did not want to die without hugging him. And now I will be able to hug him.

Abuelas protected the identity of this new grandson, as always does, with respect and love. By this, we want to say that any information that has been leaked by the press was not given by the institution.

Finally, as Estela said during the press conference, in order to encourage the almost 400 men and women who still live under a fake identity: 'we ask them to have hope; freedom and love are waiting for them. We are going to set them free and they will be themselves with their own identity.'